We’ve heard about data lakes and their importance, but we rarely talk about a testing results data lake and how it can help us. Companies have always struggled with not having a single place to hold all testing results and related data. All data related to testing are mostly scattered, hard to merge and move around, and have proven to be one of the biggest barriers for successful testing.

We’ve seen in companies where, for an instance, the automation testing team has its way of storing, managing, and maintaining their results data. Similarly, performance testing, security testing, and other types of testing have their own ways. We see this trend across teams, companies, and their respective industries.

Data is the new oil today, and the benefits equally apply to the testing domain as well.

Consider a company that has a testing team named “TCOE”. “TCOE” has been conducting automation testing, performance testing, exploratory testing, security testing, and accessibility testing across their products.

“TCOE,” after they execute performance test runs, would push all test results and data into a data lake they have created. They can store all the data as a parquet file or XML file or JSON file or any other format before it gets pushed to a data lake. The files could store response times, hits per second, errors, CPU, memory utilization as XML/Parquet files, and push it to a data lake.

Automation testing results like automation script pass/fail, validations, screenshots, errors, and other details can be pushed to the data lake as well.

Similarly, other types of testing related data can be pushed to the data lake.

There is a plethora of options to choose from and build the entire ecosystem. 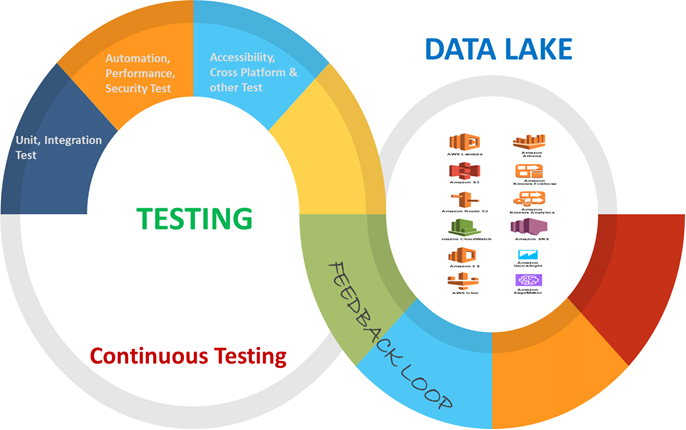 Benefits of Building a Data Lake

Information segmentation:
If there are 50 different products, a data lake can merge the overall quality of the company breakdown by product, break down by testing types. The live dashboard can be so flexible that it can meet the needs of different teams and people across the organization. For example, a CEO wanting to get a holistic view of the quality of all products to an engineer wanting to look at a specific defect detail.

How Testing Teams Can Benefits from a Data Lake

The whole idea of a testing data lake is to push all test results and test-related data into a data lake.

The data could be across: 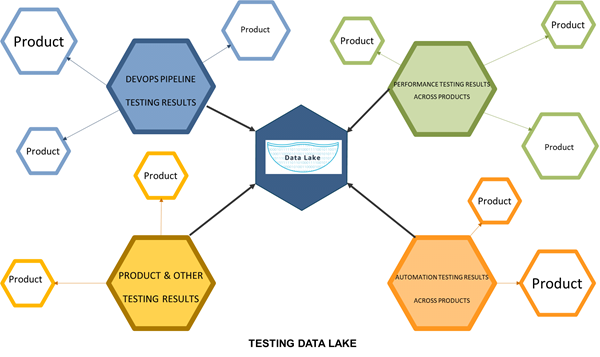 The above image depicts how we could have an open-sourced testing data lake where companies across the industry can contribute and leverage.

We could have an open-source testing data lake where companies can come subscribe, retrieve, and make use of these data for the larger benefit of the software industry. We could also have an open-source data model where APIs can be made visible to companies across the industry to contribute and leverage equally.

Having an open-source data lake has benefits like identifying similar pattern and issues. Additionally, we can create the testing data lake using different technologies. One such example is using AWS S3 to create a data lake and using other AWS services like Kinesis, Athena, and Quick Sight to build dashboard and analytics. Similarly, we can do predictive analytics and machine learning using AWS Deep learning and Sage Maker.

The other way is to use Sumologic, Jenkins, Grafana, and a combination of other tools. There are many other ways to build this. Teams must determine the best way to build based on the specialized needs and requirements of their organization(s).

Building and owning a testing data lake is becoming increasingly important for companies to succeed and they need to begin considering laying out a foundation to have this in place. There are a lot of advantages and benefits to building this for testing teams across the industry; the list is infinite!

Shift Testing: Left-Right-Left
Scroll to top
We use cookies on our website to give you the most relevant experience by remembering your preferences and repeat visits. By clicking “Accept All”, you consent to the use of ALL the cookies. However, you may visit "Cookie Settings" to provide a controlled consent.
Cookie SettingsAccept All
Manage consent

This website uses cookies to improve your experience while you navigate through the website. Out of these, the cookies that are categorized as necessary are stored on your browser as they are essential for the working of basic functionalities of the website. We also use third-party cookies that help us analyze and understand how you use this website. These cookies will be stored in your browser only with your consent. You also have the option to opt-out of these cookies. But opting out of some of these cookies may affect your browsing experience.
Necessary Always Enabled
Necessary cookies are absolutely essential for the website to function properly. These cookies ensure basic functionalities and security features of the website, anonymously.
Functional
Functional cookies help to perform certain functionalities like sharing the content of the website on social media platforms, collect feedbacks, and other third-party features.
Performance
Performance cookies are used to understand and analyze the key performance indexes of the website which helps in delivering a better user experience for the visitors.
Analytics
Analytical cookies are used to understand how visitors interact with the website. These cookies help provide information on metrics the number of visitors, bounce rate, traffic source, etc.
Advertisement
Advertisement cookies are used to provide visitors with relevant ads and marketing campaigns. These cookies track visitors across websites and collect information to provide customized ads.
Others
Other uncategorized cookies are those that are being analyzed and have not been classified into a category as yet.
SAVE & ACCEPT
Skip to content